David Spiller was born in 1942 in Dartford and grew up in the small town of Swanley in Kent. At the age of 15 he started a graphic design course at Sidcup Art School followed by a fine art painting course at Beckenham School of Art where he was classically trained in painting and drawing. This is where he also started to develop a lifelong passion for music of all kinds: rock?n?roll, rock, the blues and music from the movies. In 1962 he gained a place to study at the Slade School of Art, where he was taught Frank Auerbach and William Coldstream and where he won the Henry Tonks Prize for Drawing. In the late 70s-80s David Spiller worked as a senior lecturer at Ravensbourne College of Art. In 1985 he visited the Cologne Art Fair in Germany where he was extremely excited by seeing such a dynamic art scene that he decided he wanted to follow his own artistic career. In 1987 he moved to a studio in New York and began exhibiting at the Twinings Gallery on Broadway. The following year he moved to Berlin and had his first solo show with the Zeitkunst Galerie at the Cologne art fair. These opportunities led him to show regularly throughout Europe. With his work being presented at various European art museums and he has had solo exhibitions in over 10 countries. He currently exhibits with his Belgian gallery, Guy Pieters and in 1998 he began exhibiting in London at the Beaux Arts Gallery on Cork Street and now regularly shows with the Portland Gallery in Piccadilly. He has recently begun exhibiting his paintings with the Long-Sharp Gallery in Indianapolis. David Spiller continues to live and work at his studio in south London and his paintings are included in prestigious public and private collections throughout the world. Spiller?s work appropriates concepts from popular culture and childhood memories. His art is filled with enthusiasm and energy, compressing a world of influences and ideas onto a single piece of artwork. From: Picasso, Dubuffet, Warhol, Disney, Graphic design, often taking an already iconic image he recycles and recontextualises symbols already packed with hidden connotations. Essentially David Spiller is an urban artist focusing on graffiti and media. By using different painterly techniques he creates rich and complex surfaces. Blending styles by mixing the hard-hitting immediacy of Pop Art, with bold colours, punchy texts and clean lines, alongside expressionistic painting and hard-edged abstraction. To these striking images he adds another layer of informal freehand texts and drawings including characters and motifs that echo in his mind, combining these elements with evocative lines from his favourite songs by: the Beatles, Bob Dylan, The Pogues and other lyrics that have seeped into his consciousness. With all of this information and emotion Spiller constructs a canvas or print that uniquely combines all of these elements. Love is at the centre of David Spiller?s work. The Beatles sang All You Need is Love as if it were a mission statement. Spiller?s paintings are a cornucopia of appropriated and remembered images, a smorgasbord of influences from American Pop Art, boyhood comics, TV cartoons and art history.

The power of love

Stay Close To Me

Somewhere Over The Rainbow

Such A Perfect Day

We're After The Same Rainbow's End

If Not For You

We Can Touch The Stars

You Are My Sunshine

Love Is The Light

Love The Ones You Love

Loving You A Long Time

Such a beautiful day

Your time will come

Just You Know Why

I'll Walk With You 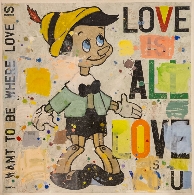 I want to be where love is