A painter and illustrator born in Antwerp on the 8th of December 1920, Pol Mara (born Lťopold Leysen) studied at the Academy of Fine Arts and at the National Institute of Higher Education. He was at first attracted to surrealist painting but then turned his sights towards lyrical abstraction. He subsequently developed a passion for pop art, his highly disconcerting approach earning him a place in art history. The recipient of numerous prizes, winner, among others, of the Tokyo Art Biennial in 1967, he also created mural paintings for the Brussels metro in 1974. He passed away in 1998.
Pol Mara studied at the Academy of Fine Arts and at the National Institute of Higher Education in Antwerp between 1941 and 1948. He held his first exhibition in 1952 and, only three years later, received a special award for his work in a competition held for Young Belgian Artists. In 1958, he joined G-58 Hessenhuis, a group of young avant-garde painters based in Antwerp founded by Gentils and Walter Leblanc.
Moving on from the styles that characterised his work in the 1950s, influenced by neo-expressionism, symbolic representation as well as an abstract phase, Pol Mara began introducing photographic elements into his works and set about appropriating subjects directly from television or illustrated magazines. In 1963, he turned his back on lyrical abstraction and focused on photographic and advertising scenes of modern life. This technique earned him comparison with artists such as the American Rauschenberg and it was in the mid 1960s that he first started travelling to the United States.
The winner of numerous prizes, including that of the Tokyo Art Biennial in 1967, Pol Mara quickly came to be considered as an ambassador of Flemish art. In 1974 he created murals for the Brussels metro. Since the summer of 1996, a part of his work has been on display in the Pol Mara Museum, housed in the castle of Gordes in Provence. His works are exhibited there on three levels in a whirl of colours and rhythms, as a clear expression of a life that affords great importance to desire and pleasure. 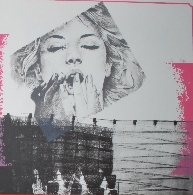