El Pez (aka Jose Sabate) was born in 1976 in Barcelona, where he learned to paint and started doing graffiti, quickly developing his own characters and the ?Barcelona Happy Style? ? his signature aesthetic, instantly recognizable by way of his grinning, giddy fish creatures, some with stars in their eyes. He is, in fact, known to friends as ?the smiling fish? (Pez is fish in Spanish) and his artwork is full of joy and color, a celebration of the school of life. His unofficial slogan reads: ?Smiling since 1999.? Pez is, in a word, prolific, and his insatiable lust for life resonates across every scene (and smile) he paints. Beyond the building-sized murals Pez has painted across Spain, in his adopted home of Columbia, in London, Miami, Amsterdam, Oslo and elsewhere, he?s been included in a dozen major publications devoted to urban art, among them The Art Of Rebellion: The World Of Street Art, Graffiti World ? Street art from five continents, and Carnet de rue, by JR. In 2007, as part of the K-Swiss Tour, he travelled across Asia painting walls, including murals in Hong Kong, Singapore, Tokyo, Seoul, and Taipei. Pez has also been exhibited in numerous street art museums, at galleries in over 20 countries, and shown at art fairs such as the Shanghai Contemporary Art Fair. His ?Barcelona Happy Style? has touched the lives of millions, spreading smiles worldwide.

Your friend is a cool guy

He is a happy boy

Where are you going? 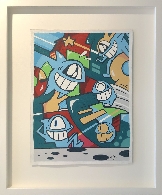 Its not a game - Green 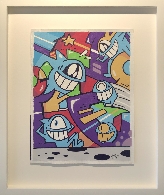 Its not a game - Purple 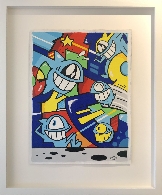 Its not a game - Blue