Liesbeth De Pauw born in Wetteren, is a promising young artist. Liesbeth's paintings are being built by / on one or more architectural spaces / elements. Layer by layer, the image is considered a new kind of space which in turn serves as a way to the next layer. The end result is ultimately separated from the initial visible area, only a few elements remain intact, and as a bearer of the canvas. The selection is subjective and selective. That what kept her attention at first glance will eventually process the image. 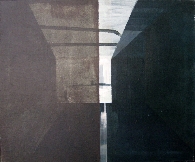 Playing with the titles